The Most Popular Video Sharing App “TikTok” Is Banned in India !!

TikTok, a trending video sharing app got banned in India as the judgment was given by the Supreme Court of justice on Tuesday, dated on 16th April 2019. The drama had come to an end when the Tamil Nadu state refused to accept China’s Bytedance technology application Tik Tok which access to the pornographic content. The problem raised when the ByteDance claimed that it is not responsible for sharing the adult content and cannot handle the things uploaded by users on the Tik Tok app from different parts of the world.

Initially, the Madras court on April 3rd filed a case against Tik Tok and asked the govt. To ban Tik Tok for encouraging pornography and made children vulnerable to sexual predators.  As per the reports from IT ministery, the government has sent a petition to Apple and Google companies to stick to the court’s order. However, the Tik Tok app is still available on Apple on Tuesday and no more on Google play store in India. 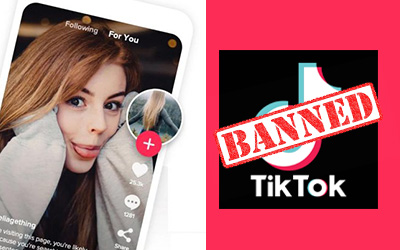 Tik Tok has gained massive popularity in India for creating and sharing the videos with eye-feasting visuals. You can also add live music, favorite dialogues, memes to make the video worth watching and gain international followers in less time

The analytics also shows that 30 million people installed the Tik Tok from January 2019 which is 10X times more than the 2018 reports. On the other side, politicians and other public organizations started criticizing the application for inappropriate content.

Why TikTok is Banned Entirely in India?

Meanwhile, Bytedance challenged the court’s decision by saying that it is completely against the speech rights in India. Further, they added saying that believe in the Indian judicial system and waiting for the court’s decision so as millions of users to follow the decision as well. The Bytedance company welcomes the decision of appointing a senior most lawyer to assist the court in further proceedings. Also, the company is trying to expand its business in India and hires more than 250 people.

Neelamegham, a lawyer who is arguing against Tik Tok said that the Supreme court had sent back the case to state court when the judge rejected to put a ban on hold. The Madras state government appealed for a written document from Bytedance, and the next hearing is scheduled on 24th April 2019.

Let us wait for the final decision of the court. Are you the member of Tik Tok? How does it feel and what are your thoughts on banning Tik Tok entirely in India. Share your experiences or opinions with us in the comment section given below.

View all contributions by Varun